Here is yet another monstrous race-as-class for OSE. This one covers the mythical Astomi – a race of monstrous humans who were physically imposing and had no mouth. It is said that they would feed themselves on odours alone, and could only be killed by a particularly pungent smell.

I like the challenge of making this sort of creature into a class, as it provides a set of very clear drawbacks to try to play around, and I as a designer need to figure out what would make it “worth it” to play the class without making it overpowered or just plain crap. This time, I’ve given the Astomi some natural AC, which whilst rarely as good as Plate mail, has the double benefit of not taking up room in the inventory. 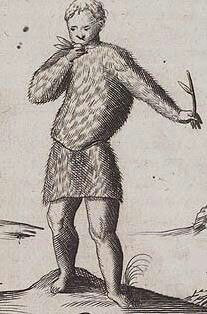 Very few Astomi exist, and those that do tend to shun civilised, urban centres, deeming them too pungent for their sensitive noses. Physically imposing, the Astomi stand over 7 feet tall and are covered head to toe with thick, porcupine like spines, providing them with a natural means of defending themselves. Astomi have no mouths, and as such sustain themselves by smelling things with nice odours – whatever they smell withers away and cannot be smelled again, but a particularly nice flower will sustain them for an entire day. A particularly pungent smell is likely to cause harm to the Astomi and causes damage to them if exposed to it for too long.

Languages: Can understand but not speak Common, Alignment language

Astomi cannot wear armour, however their thick coat of spines provides a natural form of defence. Their AC bonus is equivalent to their CON modifier *2. For example, an Astomi with a CON of 13 would have a CON modifier of +1, giving them +2AC to a total of 12 AC.

Astomi can wield any weapon, and because of their large physical size add +1 to their damage rolls.

I have no mouth, but I must breathe

Astomi have no mouths, and as such sustain themselves by smelling things with nice odours – whatever they smell withers away and cannot be smelled again. A particularly pungent smell is likely to cause harm to the Astomi and causes damage to them if exposed to it for too long. If the Astomi is in an enclosed area with a pungent, disgusting smell for more than one turn, they take 1d4 damage per turn.

However, their keen sense of smell can prove to be a powerful boon within a dungeon - giving them a 2-in-6 chance to smell things from up to 2 rooms away if they spend 10 minutes focussing on the odours of the dungeon.

Skiapods, or Monopods are another humanoid creature I have come across from when reading ancient sources. Pliny the Elder, in his Natural History, calls them Monopods due to their single leg, and reports that they move with surprising agility. He goes on to explain that they are also called Skiapods (or sciapodes, depending on the translation), which translates to “Shadow-foot” because of their large feet and tendency to use them as a parasol during hot days. Now, I think that the name “shadow-foot” is badass for a creature and have made this class riffing off of my own interpretation of the strange, small humanoids. 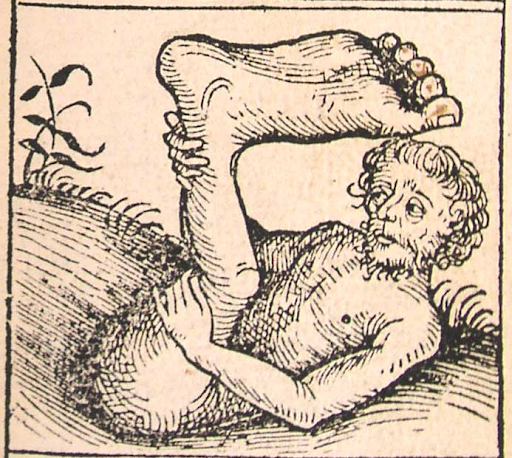 Skiapods, or Shadow-foots as they are known to some societies, are small humanoids with one leg and one large foot. Usually solitary, they tend to be spotted in the wilds, using their large foot as protection from the sun in hot regions, or using it to swing from tree branches in forested regions. They possess a great level of agility, being able to duck away from enemy blows and appear on the other side of the room in the blink of an eye. Whilst some resort to using weapons such as daggers and staves, most prefer to use their unnaturally large feet in combat.

Skiapods rely on their innate agility rather than armour to protect themselves. Moreover, their solitary and elusive nature means that armour specifically tailored to their bodies are hard to come by.

If a Skiapod has moved this round, they receive +2 AC due to their agile, erratic and strange movement. The AC received by this raises by 1 every 2 levels hereafter.

Skiapods may attempt to hide in shadows when not moving with a 75% chance of success.

Their foot can also act as protection against intense heat.

Here comes another weird monster-human hybrid class inspired by my historical research for OSE! These dog-headed creatures are often distinguished as being entirely separate from lycanthropes, in that their condition seems to be natural rather than the result of a curse, and that they are fully conscious of their actions, rather than some rabid, violent animal. They do not possess transformative powers and are often written about in a religious context. The most famous Cynocephaly in medieval literature is St. Christopher, who was a dog-headed man who would attack and bark at people, until he met Christ and turned into a human. I’ve tried to echo this in the class somewhat, disconnecting it from its religious overtones. Instead, as the characters gain levels, they become more “civilised” and human, until they lose their levels in the class and become another one.

As another little bit of flavour/mechanical complexity, I’ve given them the option of attacking with their claws or their fangs. This means that they can keep one or both of their hands free for much needed dungeoneering equipment. Its probably a bit too powerful, but I think that their power is reflected in their XP progression pretty well, being one of the slowest classes to progress behind the Elf. Let me know what you think and whether I can improve my presentation/balance.

Cynocephali are dog-headed humans who are often maligned by society for their monstrous forms. They may have been born this way, or it may be the result of a terrible curse, or from being away from lawful society for too long. Standing taller than the average human, they are adept fighters, and use their heightened sense of smell to track their prey. Cynocephali can use their sharp claws and fangs in a fight instead of their weapons if they wish. However, they are in a state of slow transformation, and once they reach level 6 will lose their canine traits and swap their levels in Cynocephaly to a human class such as Fighter, Cleric, Thief or Magic User.

Cynocephali can use their Claws and Fangs as weapons dealing d6 damage.

Cynocephali may use any armour and any weapon. They may find it difficult to find a helmet that fits comfortably.

Due to their strange, and sometimes scary, physical features, reaction rolls vs humans are rolled with a -1. Their reaction rolls vs beasts have +1. Once they reach level 4, they seem more human in their demeanour, and no longer suffer from this effect.

Cynocephali have an excellent sense of smell and have a 2-in-6 chance of smelling something behind a door.

Once they reach level 6, Cynocephali lose all of their levels in the Cynocephaly Class and swap them for 6 levels in another human class (Fighter, Cleric, Thief or Magic User). This transformation may have come in the form of a blessing from a god, or as a curse from a dark power. This may also simply occur naturally once the Cynocephaly has spent enough time around other humans.

Here is yet another monstrous race-as-class for OSE. This one covers the mythical Astomi – a race of monstrous humans who were physically im...